August 24, 2011
You can find Epcot part 1 here
After breakfast we headed back to the front of the park to try to ride some rides and see some fun stuff up there.  We started with a stop at the Baby Care Center to change out of costumes and get ready for the rest of our day, then we were off again.
We made our way to the Nemo attraction, it is really cool!  You ride the Nemo ride, which consists of sitting in a shell and slowly moving along a conveyor belt with a long screen in front of you for the entire ride.  It was nice, relaxing and air conditioned.  At the end you hop off the ride and are in an aquarium!  Totally cool!  We saw dolphins, sharks, sting rays, sea turtles and TONS of other fish.  Oh and manatees!  It was really neat.  We also did Turtle Talk with Crush.  It is SO funny and the kids LOVE it!

Nemo ended up being our only ride at Epcot.  It was PACKED and we didn't really know what we were doing, there were just sooooo many people.  We did find the Coke place that has pop from around the world, that was interesting and at times nasty.  lol  You will have to go and let me know what you think about all of the soda's.

After that we just walked around waiting on our lunch reservation.  We strolled around Canada, England and France.  In England we stopped by Winnie the Pooh's house to check on him.  He was out visiting with Christopher Robin at the time we were there so we did not get to see him but Madison had fun looking at some of his things. 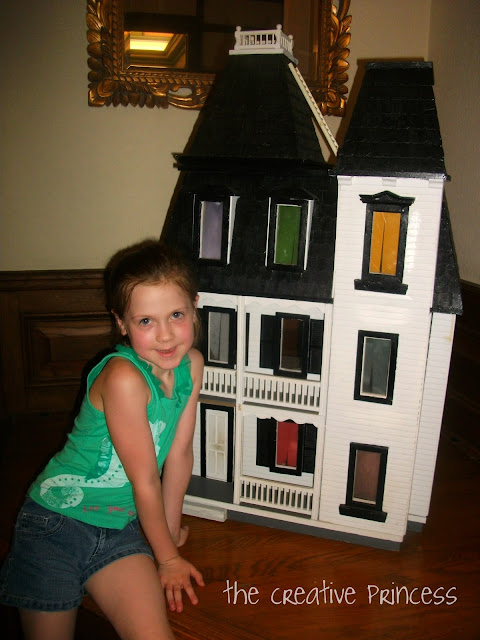 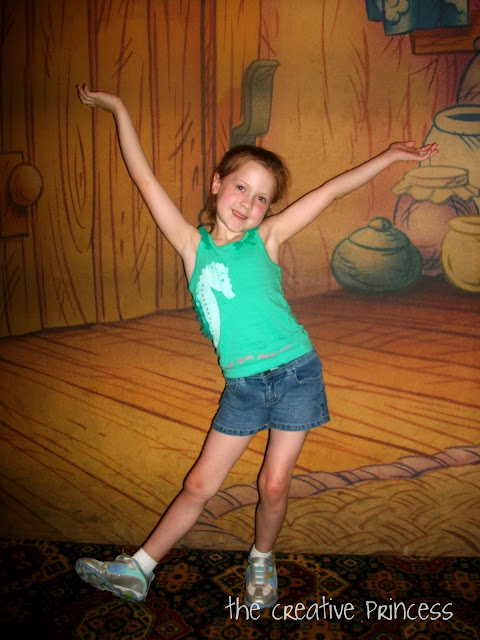 While in Jolly Ol England we found some red phone booths!  They even have working phones in them!  PAYPHONES!  When was the last time you saw a payphone?  Or used one?
Here is Madison talking to our aunt 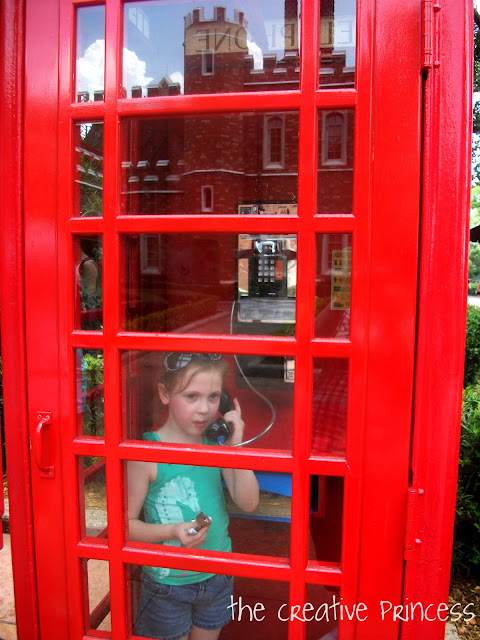 You can also call the phone booths!  Totally fun to sit on a bench near by and freak people out by telling them you like their blue shirt!  HAHA!
The #'s are....
Right Booth: 407-827-9861
Left Booth: 407-827-9862
Center Booth: 407-827-9863
I sent a text to my aunt and told her to call the number and promised her Mads would pick up.  Mads was pretty confused at first.  lol  It was fun to talk to her and I reassured her they did NOT smell near as bad as the ones in the for real England.
After we were done in England we were off to France.  My mom and aunts weren't the only ones to visit Paris this year!  We even saw the Eiffel Tower! 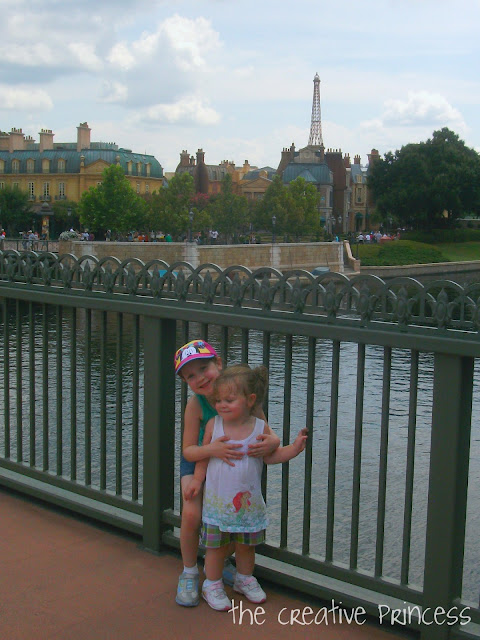 We also saw MG's FAVORITE cat...Marie from The Aristocats.  Oh how she loves her!  Every time she saw her she would SHOUT "Ristie Cats!  Ristie Cats!!" 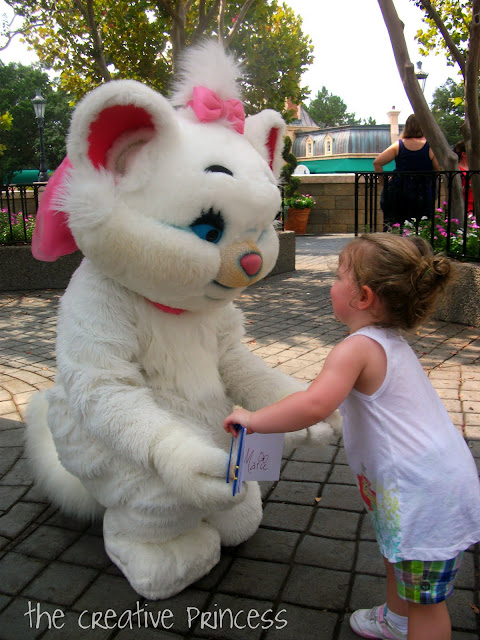 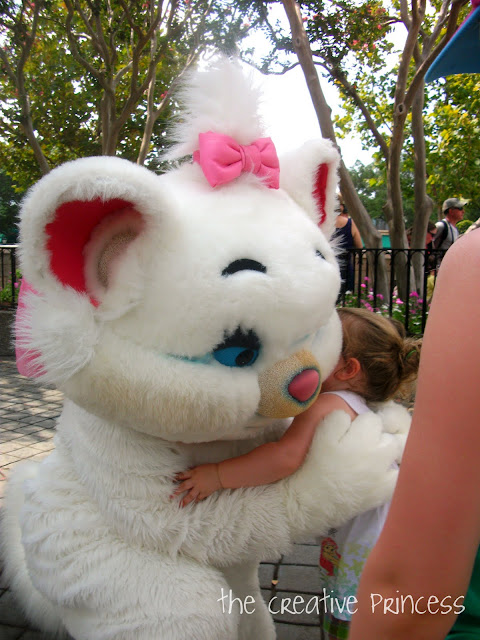 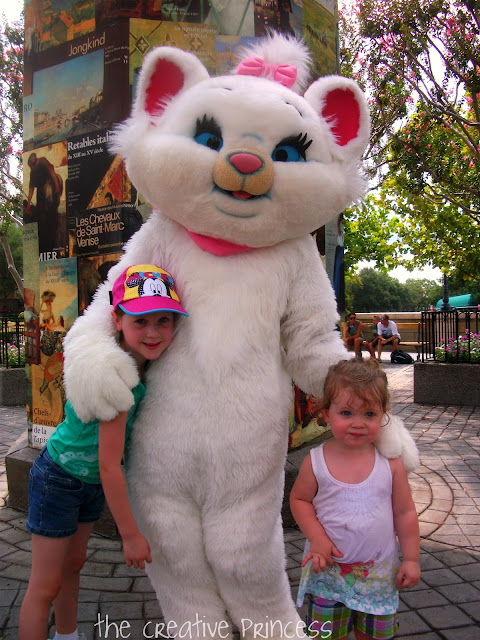 Can you tell it was HOT?
After we saw Marie it was FINALLY time for lunch.
Lunch was in Canada at Le Cellier.
OH!
MY!
GOSH!
Hubs and I both ordered the NY Strip Steak....it was AMAZING!
Seriously!
I am from Oklahoma, spent some time in Texas, I have had a few thousand steaks in my life.  You could say I am an expert steak taster.
The steak was so tender you could just about cut it with your fork.  The taste was unlike anything I have ever tasted in my life.  It was seriously THAT good!  Hubs agreed and even said "I would come back to Disney just to eat here again."  WOW!  If he is willing to go on vacation again you know it had to be pretty spectacular.  ;-)
Oh!  I almost forgot!  I had the cheese soup while there as well, the one I tried to copy a few months ago.  It was good and I definitely want to try to make it again.  I still think the bacon needs to be crispier.  The bread that accompanies your appetizer is really good as well.
For dessert I had the Maple Creme Brulee.  It was amazing as well, I could have ate three more dishes of it.  I must find that recipe as well.  Hubs had the Chocolate Whiskey Cake.  He liked it, I liked my choice better though.
After lunch it was more walking.  It was REALLY hot by then, our tummies were full and that just did not make a good combination.  We managed to walk all the way around World Showcase....I seriously thought I was going to die, but we made it.
We had planned to come back to Epcot after we took a little break but that just did not happen.  We cancelled our reservations at Tepan Edo and just stayed in.  Mads and I ended up going to the quick service restaurant in our resort for dinner.
Did I mention it was HOT?  That was the day Oklahoma was breaking all sorts of records and got up to 117 so I shouldn't really complain about the 96 degrees we were dealing with.  But, when you are on concrete and the sun is beating down on you it is still REALLY hot.
We decided that day when we come back it will be in December, when it is cool!  lol

For Such a Time as This

December 08, 2014
This post is a sponsored post from Family Christian , all opinions are my own. You know when you find a group of friends and you just sit back in amazement when you think of just how awesome they are? I am SO lucky to have a group like that in my life. I am even luckier to have this group in my girls' lives.  It is so very important to me for my girls to see the relationships I have with these women. The way we interact and love each other. It is important they see that even though each one of these women are very, very different, we still come together in love and laughter. It is also important to me that my girls see the relationships that these wonderful women have with their families. I am lucky enough to be close friends with two AMAZING families. We do things together, as families, we also do things together just the moms and kids. I love that my girls see these strong families and know that these families are there for them should they ever need them. In the
Read more