August 29, 2011
Oh Magic Kingdom (MK).  When most people think of Walt Disney World it is Magic Kingdom that comes to mind first.  It is after all where all the cool people hang out!
If you are there before the park opens you get to see a cute little skit that welcomes you to the park.  The train pulls into the station and the conductor gets off the train and welcomes you to the park and introduces the characters.  Then they all break out in song and dance.  Totally cute! 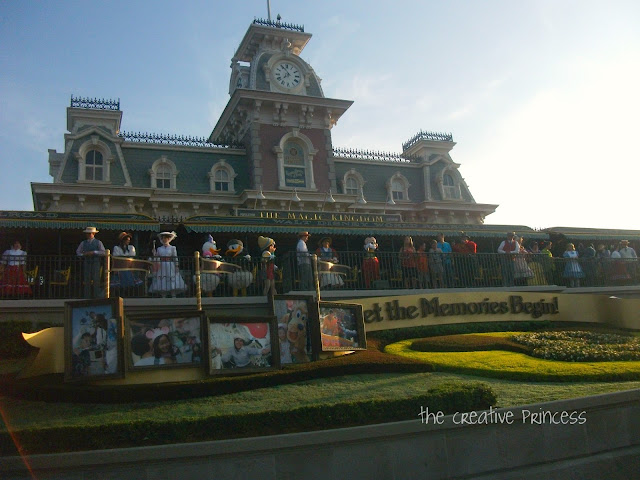 After the performance is over there is a mad RUSH into the park.  Seriously, if you don't want to get ran over just stay back a little bit.
Once we were in the park we headed straight to Main Street Bakery.  We had reservations for Kona Cafe but I just could not stomach walking back in the Poly after the night we had at Ohana a few nights before.  So we canceled and just ate in the park.  Not the best way to spend our dining plan credits but it is what it is.
Hubs had an omelet (I think, it was about I month ago so my memory is a bit shady), the girls shared a cinnamon roll and I had a chocolate croissant (which I thought would be warm, it was cold, but still delish).
Once we were done we walked out on Main Street and ran right into a street performance!  It was pretty cute. 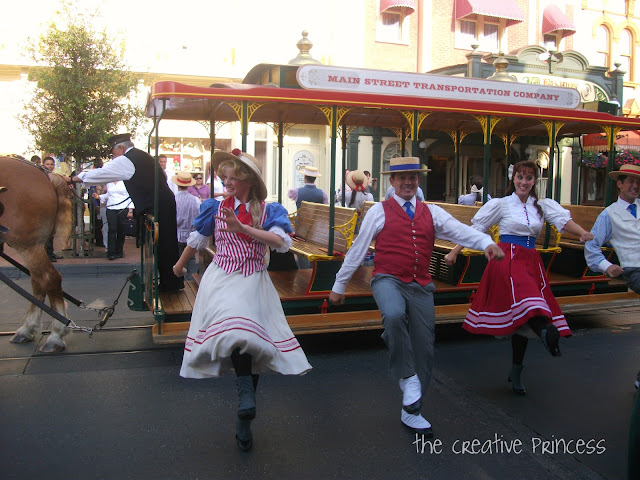 Then we were off to the rides!  With a pit stop to take a pic in front of the castle first, of course. 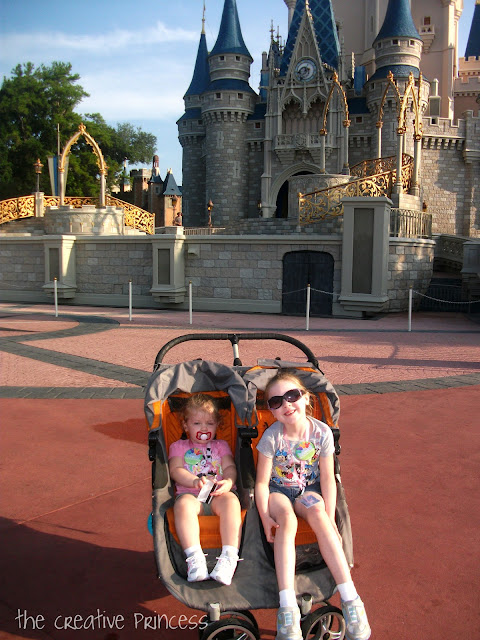 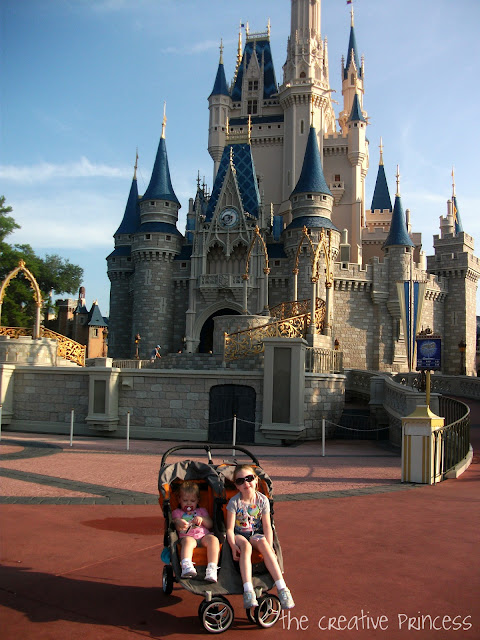 Our first ride was Dumbo......of course! 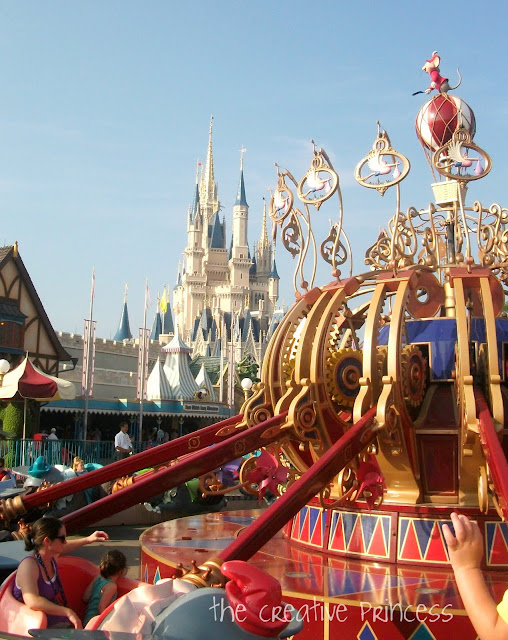 We waited about 5 min, the wait was over 45 the next time we walked by!  Eeek!
From the ride we saw the new expansion.  They are building Beast's Castle, from Beauty and the Beast!  SO excited about that!  It is set to open next fall (2012).  There will be a new restaurant there as well called 'Be our Guest' or something like that and will resemble the dining hall from Beast's Castle in the movie.  I am SO excited about this!!! 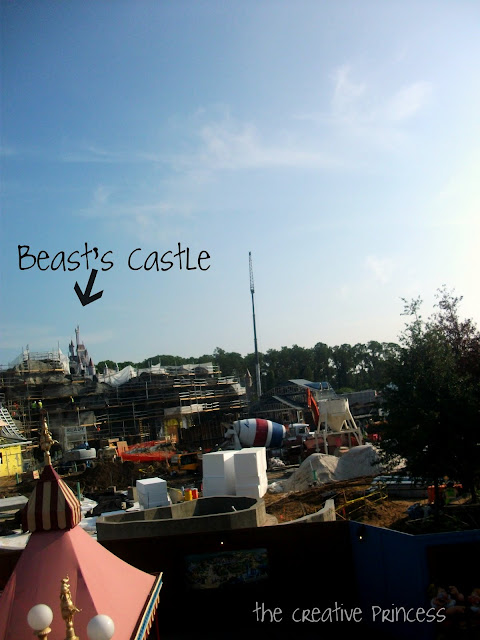 After Dumbo it was on to more rides.  We timed them all just about perfectly and never waited more than 10 minutes, most of them never more than 5.  We timed Small World so perfectly that we just happened to get a boat to ourselves!  Sweet! 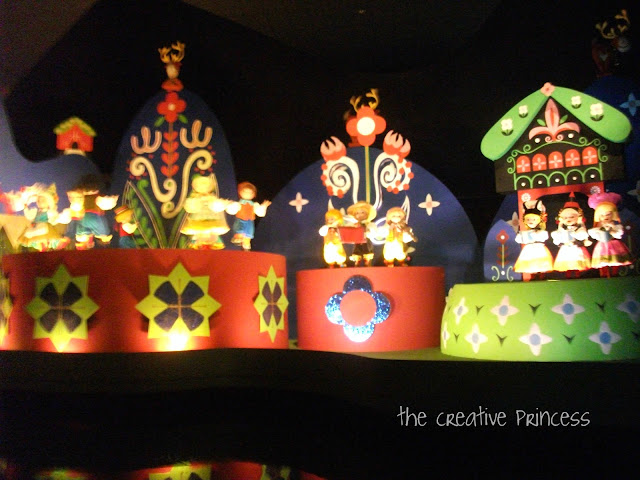 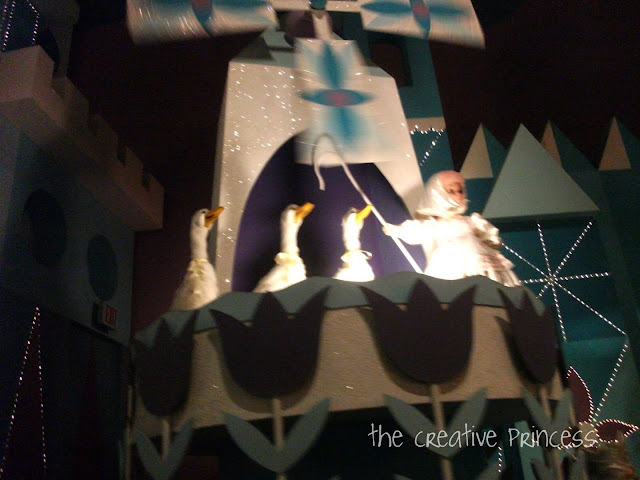 MG LOVED those silly "ducks" as she called them.  Every time she saw them she would YELL "DUCKS!"
We managed to get in 6 rides and one show before lunch.  I do recommend seeing the Presidential History show, or whatever it is called.  It is the one that has all the presidents and shows the history of the presidency.
You will walk out in awe of how far we are from what the founding fathers had in mind when they put their plan in place.  Not a good awe either.  Anywho.....
After that it was time for lunch.
Lunch today was at the Crystal Palace and featured the characters from Winnie the Pooh.  I was hot and tired and food was OK at best.  The wait staff here was not that great (again, theme here) but the characters were ok.  We probably would not go back, we aren't big Pooh fans to begin with.
After lunch we headed back to our room for a quick rest and to grab things for our BIG plans that evening.